Back to Obituaries/Notices
Margetson, Ralph 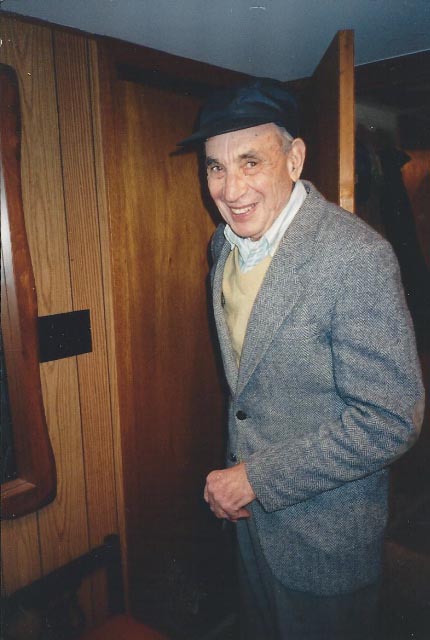 Ralph was born in East Titherly, Hampshire, England, and then lived with his family in
the nearby village of Lockerly, where he helped his father as an estate gardener and was a
boy scout and received his only formal education.  He immigrated to Canada in 1929,
where he settled on the farm on Melville Road with his parents and three of his four
siblings.  Soon after arriving, Ralph became a farmhand for the Russell family who had
no children, just north of Roblin Mills ( Ameliasburgh Village) where he worked for six
years.  These formative years were very important in Ralph’s life and he spoke and
reminisced about his work and social life during this period very often, and the joy he had
living and working on the farm.  After Mr. Russell died and the farm was sold, Ralph
returned home to work with his parents and brother to assist in the farm development and
expansion.  Ralph had many lifelong friends and farming neighbors that were an
important part of the rest of his life on Melville Road.

In 1939, Ralph enlisted in the Canadian Army and was sent to England in 1942 where he
trained and lived until the invasion of D-Day in 1944.  He was assigned to the Royal
Canadian Artillery, 3rd Medium Regiment, and criss-crossed England and Wales training.
Ralph enjoyed being back in England and was home stationed not far from his sister Jess,
who had stayed behind when the family emigrated, allowing him the opportunity to spend
time with her.  Ralph never forgot the sacrifices, both at home and abroad, that were
endured during the war and after, and was very devoted to promoting remembrance.  It
was during his time in England that Ralph met the love of his life, Pearl, from Croyden,
Surrey, whom he married in England, January 12, 1946 after returning from Germany at
war’s end and prior to returning to Canada on a troop ship.  Pearl soon after joined him
on Melville Road where they have lived their lives together for 69 years.  Ralph and Pearl
were a remarkable team throughout their life and established a very successful farm
operation which expanded to other farms on Melville Road.  Pearl was the perfect
compliment for Ralph, guiding and supporting him throughout his life.  They were also
loving and devoted parents to their 5 children.

In 1966, Ralph was asked to become the superintendent at the new Provincial Park at
North Beach, and from that time forward until his retirement in 1982, Ralph was an
integral part of the formation and development of this Park.  It was at this time that the
dairy portion of the farm was removed, but other farm operations that fit with his summer
work were developed.  After retirement, Ralph enjoyed his time on the farm and working
in his garden.  He enjoyed keeping abreast of local issues and for many years wrote his
letters to the Wellington Times, many of which people still remark about to this day.  He
assisted Andy in his farm activities with his advice and experience, and he could be
drawn on at any time by anyone for his wisdom on many issues.  Ralph often remarked
about the fortunate and long life he had, saying many times that “I have never been
unemployed, hungry, cold, or sick, and I had the best wife and family in the world, and
with Pearl, financially prospered.” At the last he said “it is hard for me to believe when so
many veterans and people my age that I grew up with are gone, and I am still here.”
Ralph was ready to say goodbye and he died peacefully at home on Melville Road, in his
bed with his family at his side.

Friends may call at the
Ainsworth Funeral Home,
288 Noxon Avenue, Wellington
on Tuesday, July 21st from 1-3 and 6-8 p.m.
Funeral Service will be held at the
Wellington United Church, Wellington
on Wednesday, July 22nd at 1:00 p.m.
Reverend Andrew Wilson officiating
Interment Christ Church Cemetery, Hillier
Memorial Donations to the Wellington Legion Br. #160 Poppy Fund
would be appreciated by the family.
Online condolences and donations at
www.ainsworthfuneralhome.com

Donations may be made payable to Wellington Legion Br. 160 Poppy Fund
and mailed to
Royal Canadian Legion Branch 160
Box 91
Wellington, ON K0K 3L0